Well, my little VP has already dove right into her new duties and is in the middle of planning the school’s first “dance”. It is a retro 50’s theme and she’s really excited to get to the decorating (she’s just like mom). Anyway, in the midst of all her student council endeavors, she has been spending her nights kicking butt with her softball team. They entered the playoffs undefeated and so went straight into the championship game, which was last night. George was the Asst Coach (he wanted to be the Head Coach, but got deboed) and led the girls to a winning season. SO the game played on…we were all on edge because we were down 4 runs with the last inning in play. Saige started a two-out rally and batted three girls in. Once that inning was over, the Flames were tied 6-6. We had to go into an extra inning and scored to win the game. We were so proud of the team and of our Saige for giving her all. She played awesome all season and I can see more and more that she has inherited her dad’s sporty-like skills. He has no idea how much she looks up to him…Here he is congratulating his girl!! 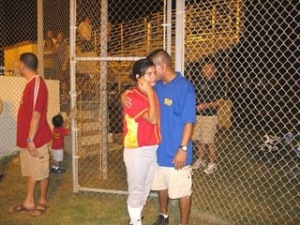 Why is it that immediately after the game the boys come around wanting to “hi-five” my daughter. Geeeeez!!! 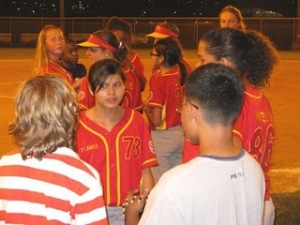 The girls then passed the game ball around for Saige to put her John Hancock on it.

Coach George had a little help accepting his trophy…

What a cute pair….(she’s really growing)

After the game, we took her out for a celebratory dinner at her favorite restaurant…Four Seasons. Teppenyaki at its best…Teage loves watching the chef perform his shaker trick!!

The chef was having too much fun with our delerious selves and wanted to take our picture…What a fun way to top off a great evening!!!