2015 just came and went didn’t it?  How was your year besides lightening fast? Ours was eventful, clearly, and most of my usual practices took a backseat to the hustle and bustle of ’15.  However, the Holidays have given me … END_OF_DOCUMENT_TOKEN_TO_BE_REPLACED

Today we carved our pumpkins! USO was hosting an event where you could bring your pumpkins and use their space and accessories to make your pumpkins shine!!! My friend Tanya and I started out there while G took the boys … END_OF_DOCUMENT_TOKEN_TO_BE_REPLACED

I’m baaaaaaaaack!  Sorry peeps! I have been avoiding the blog for quite some time because of many reasons….closing out our time in Germany with family and friends, the packing itself,  vacation, road trips, settling into our new digs, and a … END_OF_DOCUMENT_TOKEN_TO_BE_REPLACED

Hope everyone has a fabulous and safe Trick or Treating evening :o)  This will be Saige’s last year going out with the boys and handing out candy with us :o( So weird…. More pics to follow I’m sure… Happy Halloween … END_OF_DOCUMENT_TOKEN_TO_BE_REPLACED

Our dearest friend Angel… You have left his earth so young and vibrant, taking your powers of good and pure honesty with you to the Lord.  Thank you God, for allowing me to cross paths with such an amazing woman. … END_OF_DOCUMENT_TOKEN_TO_BE_REPLACED

The events of last month when Trayvon Martin was gunned down in an area close to home for me has sparked a nationwide uproar from all walks of life.  I knew I wanted to post something about this tragedy a while back, I could not ever imagine how I could cope with losing one of my kids this way.  I waited until now because I felt like there was so much being said (and still is) that I was engaged in listening more than I was in speaking.

First off, I want to be clear…I obviously wasn’t there that fateful night of February 26th.  I don’t know exactly what “went down” between Zimmerman and Trayvon.  What I do know is there is no right way to explain a grown man gunning down an unarmed teenager in ANY, I mean ANY, situation.  Trayvon did not hold a firearm that night.  Speculation and eyewitness reports suggest that he physically attacked Zimmerman.  Is this man unable to “defend” himself in the same manner without deadly force if this was actually the situation at hand?  We all know or heard of teenagers that practice criminal behavior or are convicted juvenile delinquents.  They are the gang bangers and extremely violent teens that consistently utilize weapons upon weapons from their arsenal of deadly force.  These people are just as we call them, race unknown…as criminals. Criminals come in all colors, size, gender, and age.  I am speaking about Trayvon, not the criminals here, and the so called angsty teens who on average may be moody, expressive, bratty, or immature.  I have two teenagers, and they definitely flaunt these behaviors throughout their adolescence.  It is also known that some teens will “fight” to cope with a bad situation or to defend themselves.  So here’s the deal…if a teen gets angsty and puts his hands on another human being, that opens the door to shoot and kill?  Of course not.  In an argument or altercation, adults can’t just shoot each other, kids can’t shoot each other, and certainly adults can’t shoot kids either without expecting the consequences!  It’s called murder anyway you spin it.  This is where I think the main shock and awe stems from…that night Zimmerman walked back home and laid in his bed, a free man without question while Trayvon was wheeled away to the medical examiner’s office.

The debate concerning racial profiling is sad because the act of racial profiling 100% exists.  True here in this situation?…I would say most likely.  True in our nation?…you bet!  It is a shame and a travesty that people continue to discriminate with such forceable hate.  The irony is the public, in general, is the worst example for our people.  We talk about how wrong it is to hate and discriminate, but then we have reports, blogs, interviews, books, magazines, the Internet, and people telling us how we SHOULD in fact judge one another.  It’s everywhere…

Survival by way of Profiling?

Shaming One Race to ‘Help’ Another?

The buck stops with us people.  If we don’t change our thoughts towards one another, we are responsible as well.  Trayvon didn’t need to die that night.  Taryvon didn’t need to be persecuted for his attire.  Trayvon is just like any other teen and adult in this world, worthy of a future.

I pray for justice.  I pray for our great nation…sigh.

To recap, a timeline of events for those not familiar with the Trayvon Martin case:

The slaying of 17-year-old Trayvon Martin, a Florida high school student who was shot and killed by George Zimmerman, a self-appointed neighborhood watch captain, has captured national attention. Petitions calling for justice for Martin have exploded, amid allegations of racism and calls for more scrutiny…

The birthday summer season has officially hit in the Isla household…

With two June babies (Lord, help me), it is double the gifts, double the parties, double the novelties, and double the fun!  This year is extra special for my June buggies…Teage turned 5 and Saige turned 16!! Now, I know what you must be thinking….wow, two awesome milestones.  Yes it is….the first, going from paid care to free school and second, going from 2 license  holders to 3!  Both are scary….and both require Mommy to earn free gray hairs.  So, in order to give each milestone it’s due credit…we must spotlight each one, starting with Teage…my not so little man.  Sniff Sniff…

Teage has been in the 4-5 year old class at the CDC since September.  Until 2 June, he was one of the only 4 year olds left…all the rest were already 5.  So, turning 5 didn’t equate to big boy school to him first…it was more about the hierarchy in Room 7.  He decided to dress as Inspector Gadget that day (no idea why) and take in his new found “boyhood”.  He stormed into the class and screamed “I’m five now” like he was ready to take second boss in the mob.  And ever since, he has made sure every stranger on the street knows he is a strapping 5 year old.  fast forward to that evening…My kids always get to pick what they have for dinner on their birthdays…and Teage decided to run with it.  “Pancakes and sausage please!”  If anyone knows my family, we don’t really do breakfast for dinner (before you start saying…’breakfast for dinner is the BOMB’…I did, in fact, grow up eating random breakfast meals for supper every now and then), however George was never given that memo I guess.  He has been refusing my breakfast dinners for over 16 years.  He says that it is not right to eat eggs after dark…sigh.  Sometimes you just have to just put yourself in the game and try new things…and he did….and he liked!  It was one of the best family dinners we had had in a while.

Anyway, we had contemplated whether or not we should have a full fledged birthday party for Teage since we were so close to leaving for FL.  After all, I think round-trip tickets to the states and a dabble in Disney/Universal is really gift enough.  After some careful thought, I decided that having a last ditch opportunity to say goodbye  to our peeps (and the fact that Teagie will be starting a summer camp when we get back and no longer be in his school) was a perfect way to start our summer off the right.  The recent obsession in our house these days has been Pirates of the Caribbean…so it seemed only fitting that we go there with the party.  PLUS, the Germans are equally infatuated with pirates by the amount of pirate party pizazz I was finding at every store.  Good times…Check out our Pirate Party Fun!!!! 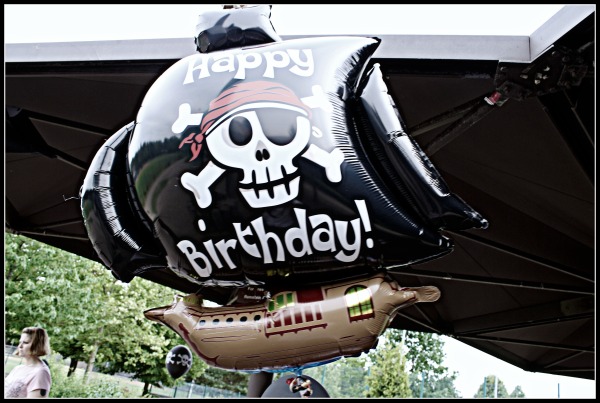 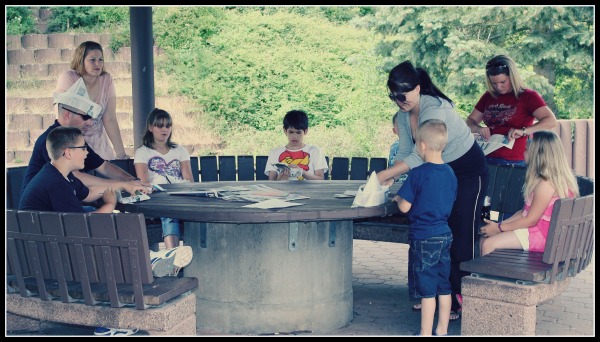 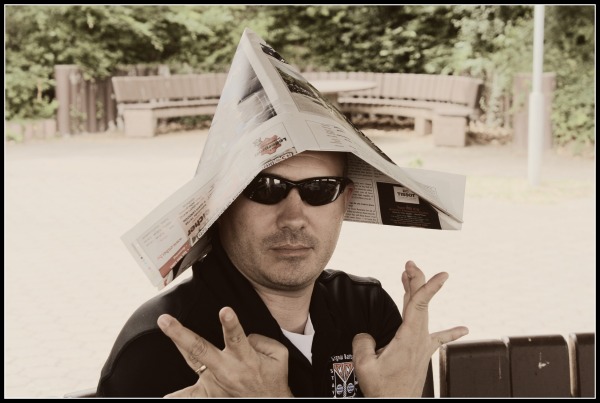 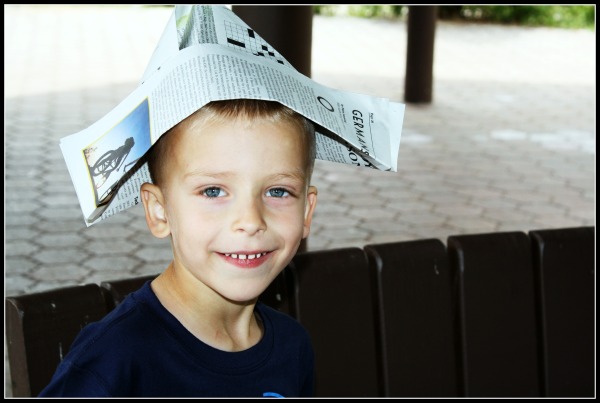 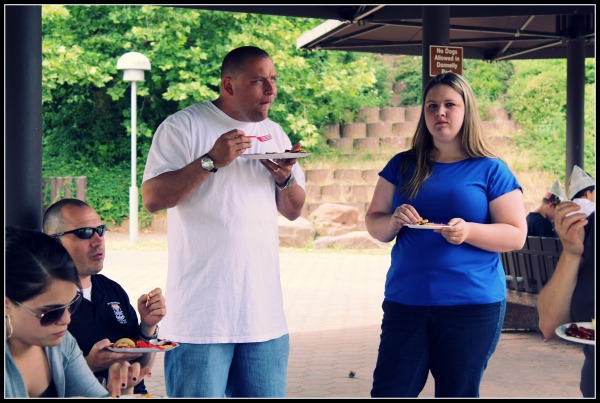 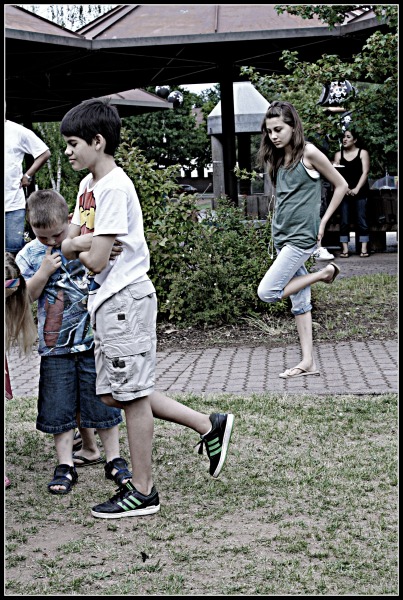 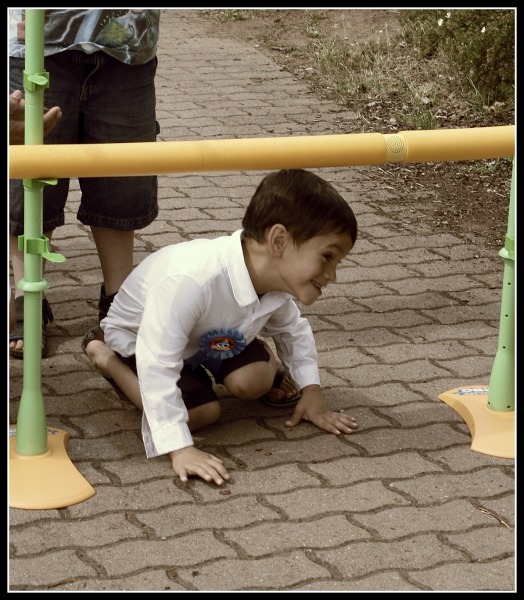 Getting ready for the Treasure Hunt 🙂

You found the treasure!!! 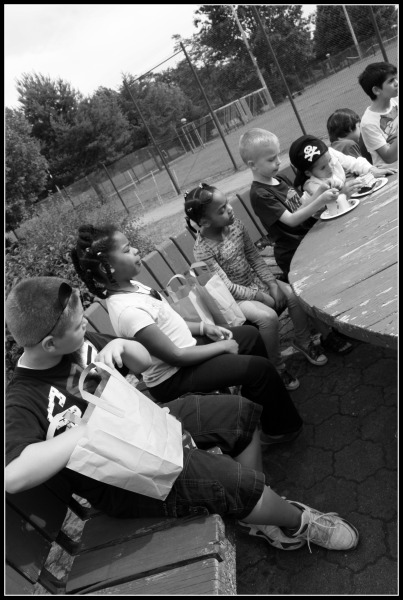 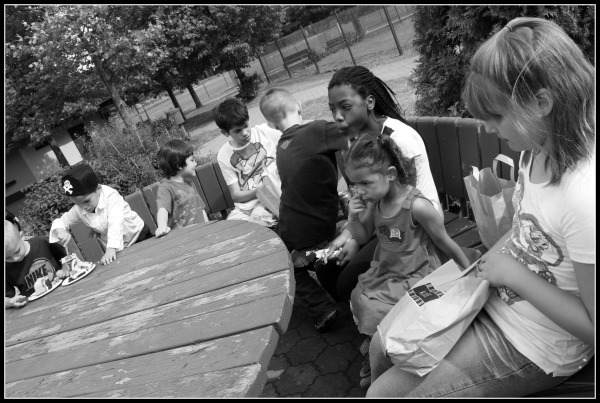 Adult games are fun, too!

Especially when you get to win a kick a$$ Summer Basket!!

Thx for everyone that gifted Teagie…he is truly blessed 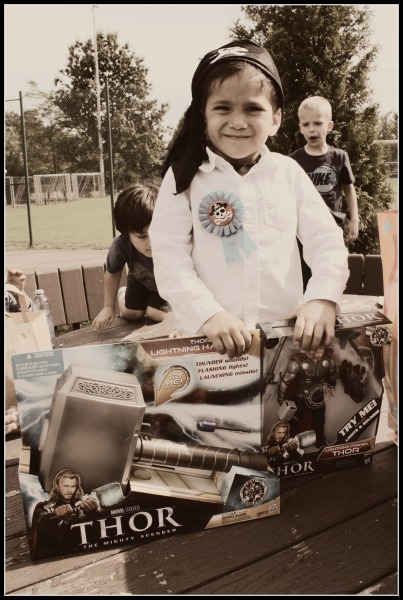 Back to Game On!!  The personalized pirate pillowcase race… 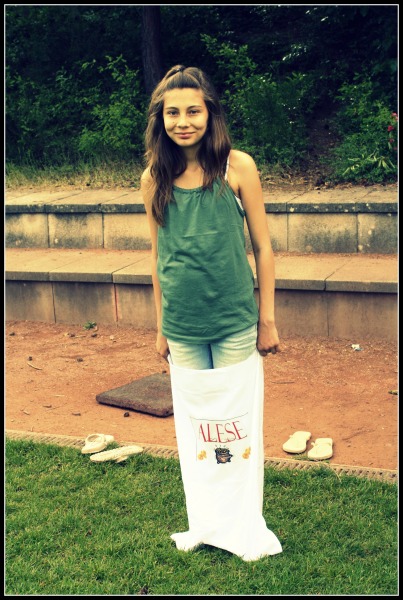 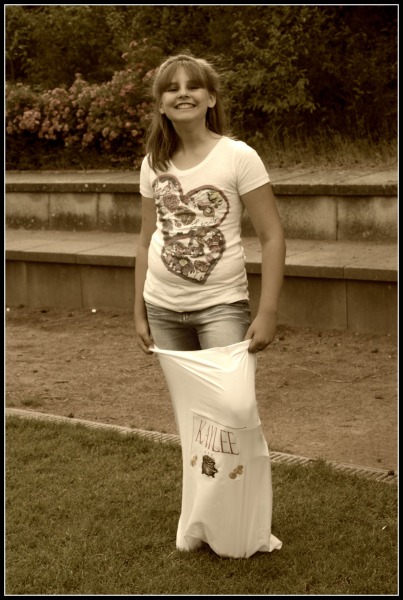 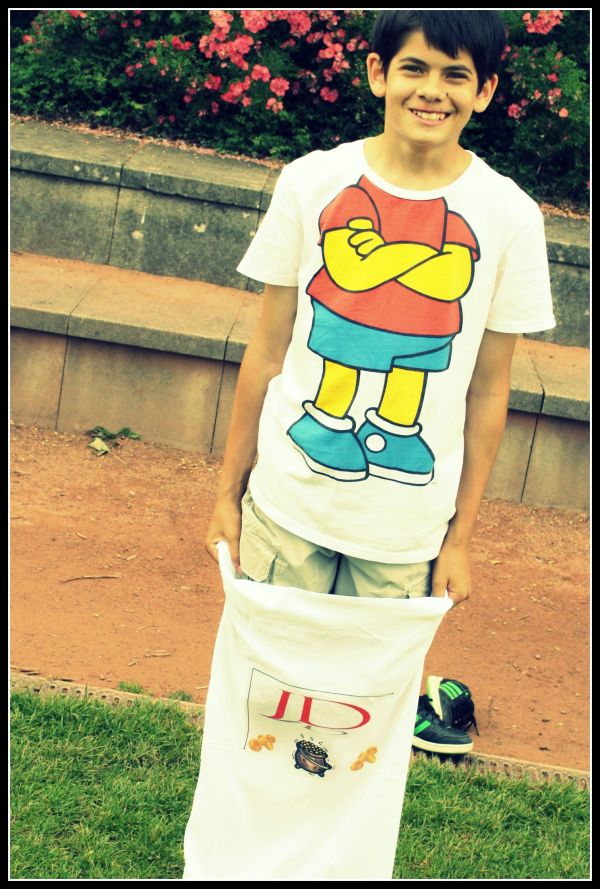 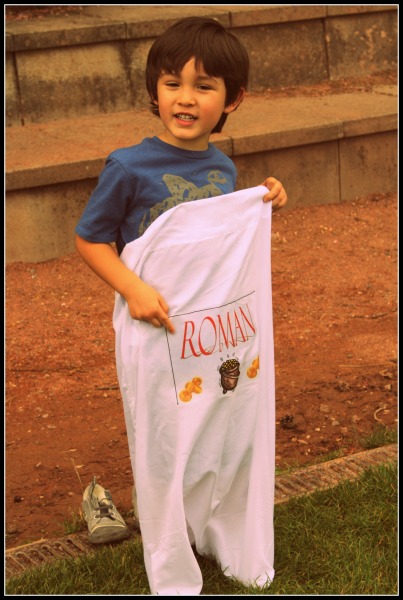 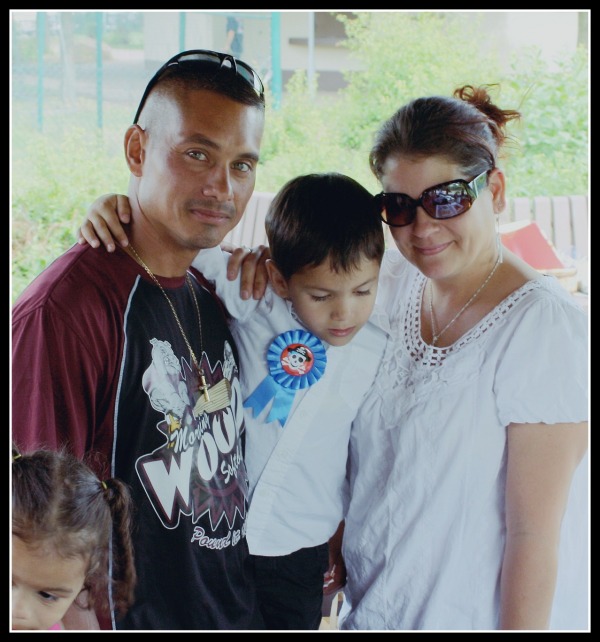 Soon to come, there will be a post to cover Saige’s 16th birthday…we are having her party when we come back from the states so that she can have all her friends there.  But we did dinner, she requested Chili’s again this year, and we (Aunt Rhea, G-Pa, and Mrs Amee) showered her with gifts…which included lotso money to spend on vacation!! 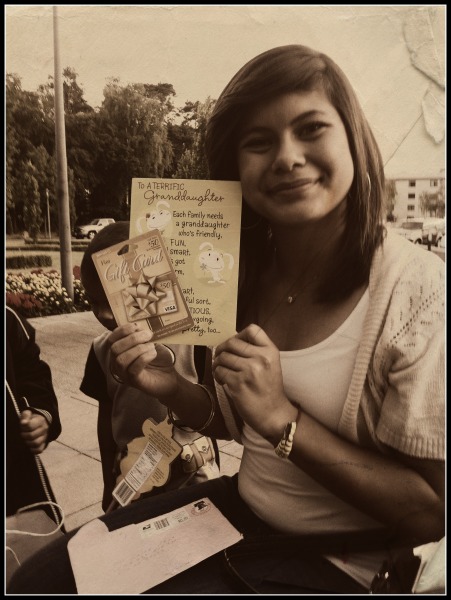 She also got a new camera and this keepsake throw with her high school name and mascot on it.  Nice!! 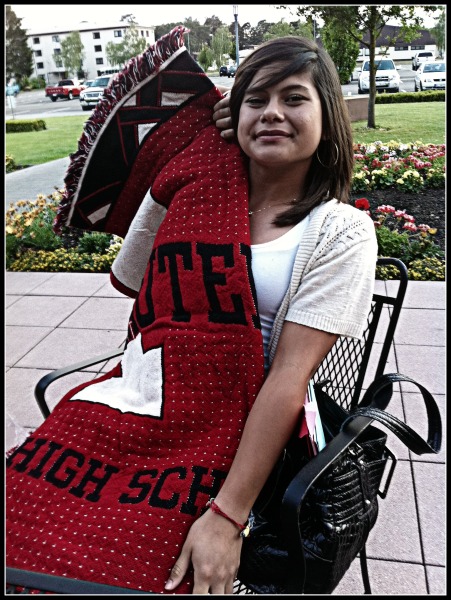 I’m so blessed to have such awesome kids and great people in my life that feel the same way I do about them.  Thank you for all those that made my children feel special on their day 🙂

Until next time…and until I take my feet out of the pool,

I have nothing to say except where have these Mob Wives been all my life??  My SIL just wrote a post about the whole mob wife vs. military wife here.  There really are some similarities.  The show is super intense and several times while watching I’ve had to push my jaw back up to my mouth.

Renee is the resident “down ass bitch”.  She is like some kind of 41 year old mob royal princess, delusionally speaking. Mob link: Dad’s part of the Bonanno crime family and incarcerated. 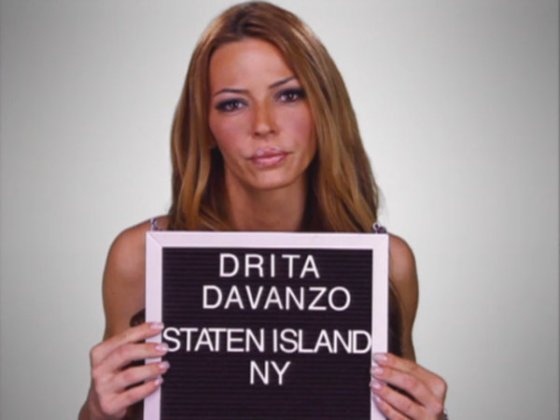 Drita is the vein popping, over compensating, Albanian that will knock your block off if you wear red on Thursday.  Mob Link: Husband is part of the Springville Boys Gang and a serial bank robber…you guessed it, he is also in prison.

Carla is a wife and mom to the mafia lifestyle, with one foot out the door.  The way I see it, she will lend her affiliation if it means a new fur coat is on the horizon.  Mob link: Husband stole over 17 million dollars from senior citizens in a con and….he’s incarcerated.

Last up is Karen…she is the flip flopper.  Once a mafia princess, her dad ratted and sent her into hiding.  She is returning to NY to write a book about all the crazy BS this show barely touches on.  Mob link: Dad, Sammy the Bull is one of the most infamous rats in mob history…being a rat means you still go to, wait for it…prison.

This show is guilty pleasure with a capital GP!!  Bump Shaunie & Evelyn with their minions on Basketball Wives, this has far surpassed!

Great, now I feel like I need to hit up a casino or something…

Catch up with the show on VH1..only 3 epis in!!  You will NOT be disappointed! 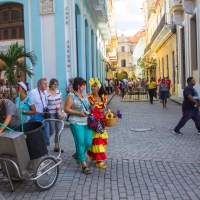 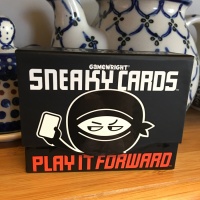 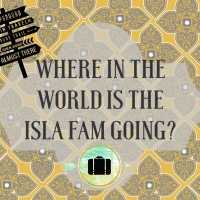